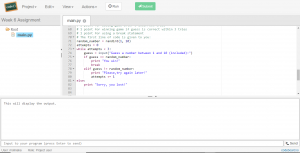 For the past weeks, we started learning deeply into programming, we took a lesson on “Python” which is a type of programming language and the conditions. In the first week of the round, we Learned about Python’s simple Conditionals such as Booleans, Comparisons, Indentation, If statement, Elif statement, Else statement, And, Or, Not. After that, we learned more deeply into Python For loop which is Break Statement, Continue Statement and range function. First, I felt that it’s fun, simple and not that hard, however, as we go further I didn’t feel like that anymore because it went harder and harder than it was. As we learned more conditions, there are more lines of code that we have to write. Also, it’s more difficult, sometimes, It took me so much time and I still couldn’t solve it and I felt so stressed. However, I still get through it because the teacher help explained as well as my friend. Even though it’s hard but at the same time, I found that I’ve learned a lot. Also, we practice on Codecademy whenever we finished having a lesson about it and we have assignments on Codeboard every week. To sum up, this has been a great and tough round also.

Liger Leadership Academy students are English Language Learners. They have been immersed in English since arriving at Liger, We pride ourselves on prioritizing process over product. Please excuse any English errors as part of the learning continuum our students have taken over the years.
‹ › ×